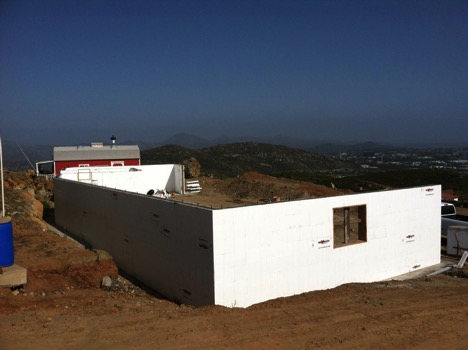 With California’s real estate becoming scarce and overpriced, developers are finding alternative routes in achieving more square footage and value in their property. For a long time, the myth that California didn’t have a need for basements, was rooted in its history in tract home developments since WWII and the notion that because of the low impact of a minimal frost line, deeper embedded footings weren’t necessary along the coast. There have also been misconceptions regarding inferior strength of basements because of California’s seismic zone. Now that ICFs have been proven to exceed seismic requirements and offer unique benefits to basements, these myths of California not benefitting from basement construction are busted.

High costs of property are now forcing developers to attain more value by digging down even though construction at ground level is thought to be cheaper and easier. With new innovative building products such as Insulated Concrete Forms (ICFs), basements along the coast are becoming more enticing. Because ICFs exceed code requirements for seismic conditions,  the fear of earthquakes causing basements to collapse has faded away. Due to ICFs being constructed with a continuous concrete core and structural steel, they deliver higher strength values for deep foundations that allow for very little movement during an earthquake. Therefore, ICFs will grant homes the safest level of protection in structural strength below or above grade.

The expandable polystyrene (EPS) panels on both sides of the ICF forms help overcome many other issues usually found in basement construction, including waterproofing, mold and mildew, and allergens/infestation of bugs and rodents. In addition to those benefits, ICFs can deliver lower labor costs, faster production times, 4 hour fire ratings, higher insulation values, greater sound reduction values (STC ratings) and energy savings compared to conventional building. All these conditions create perfect spaces for recreational rooms such as offices, guest bedrooms or entertainment rooms which increase value and equity in a home by going underground and constructing subterranean basements out of ICFs.

Just because the frost line in coastal California is not very deep, it doesn’t mean basements aren’t a smart investment to make on lots in warmer climates. ICF basements in these climates also support indoor air quality. Assisted air exchangers such as Energy Recovery Ventilators (ERV) or Heat Recovery Ventilators (HRV) contribute in reduced respiratory issues of odors, better humidity levels, lower spore counts, cleaner air, and higher oxygen levels. Lighting design in basements can utilize alternative lighting such as CFL or LED, incorporating light wells and accommodating above grade windows to supply a welcome environment. With all these benefits considered, ICFs make subterranean structures very pleasant and comfortable rooms even though they are underground.

Because of the many attributes, it’s clear why basements are now constantly being re-evaluated and incorporated into building on coastal developments. The benefits and values outweigh the costs when building basements, especially on high priced lots. Let’s find value in our investments buy making the most of them. Begin to think outside the box by beginning to think below the box. Let your next basement be built fast and built strong by using Insulated Concrete Forms.